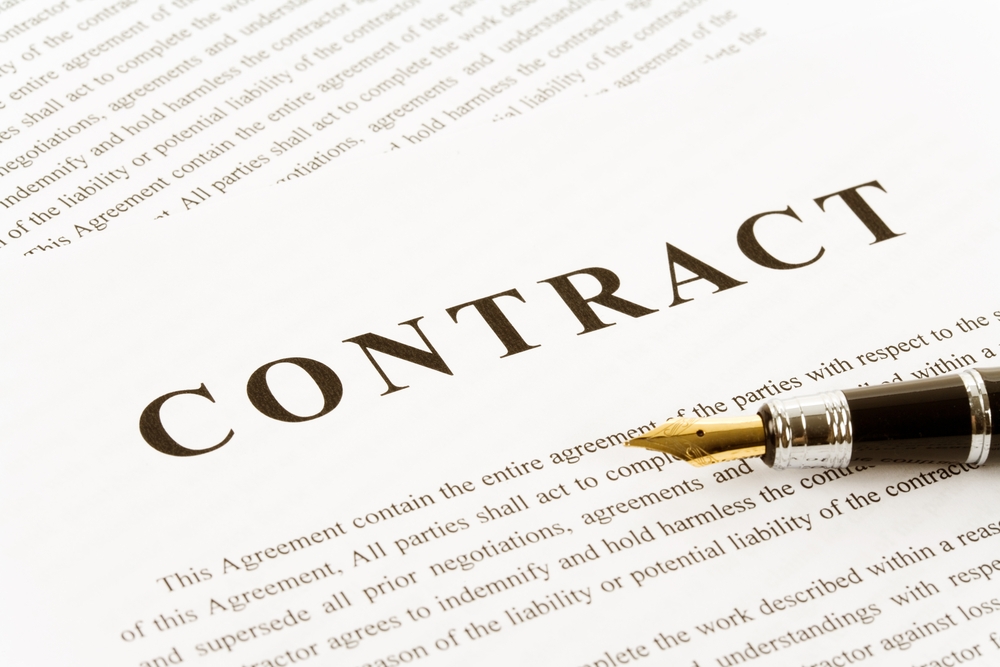 A contract that is otherwise valid may still be unenforceable if it is not in the proper form.  Certain types of contracts must be in writing or evidenced by a memorandum or an electronic record.  The writing requirement does not mean the agreement has to be on paper, e.g. an exchange of emails that evidences the parties’ contract can be sufficient, as long as they are “signed”, or agreed to, by the party against whom enforcement is sought.  With respect to electronic communications, a party’s name typed at the bottom of an email can qualify as a signature.

Every state has a statute providing what types of contracts must be in writing, referred to as the Statute of Frauds.  The primary purpose of the statute is to prevent harm to innocent parties by requiring written evidence of agreements concerning important transactions.  Thus an oral contract that is required to be in writing is typically voidable by a party who later does not want to follow through with the agreement.

While there are variations between the states, the following types of contracts are generally required to be in writing or evidenced by a written memorandum or electronic record:

A contract involving land is only enforceable if it is in writing or evidenced by a written memorandum.  Land is real property and all physical objects that are permanently attached to the soil, including buildings, fences, trees, and even the soil itself.  The contract must describe the property being transferred with sufficient certainty for it to be identified.  The Statute of Frauds is a defense to the enforcement of an oral contract for the sale of land, and also requires written evidence of contracts for the transfer of other interests in land, such as a mortgage and a lease.  Options to purchase land must also be in writing for the option to be enforced.

A collateral, or secondary, promise is one that is ancillary to a principal transaction or primary contractual relationship.  Stated differently, a collateral promise is one made by a third party to assume the debts or obligations of a primary party to a contract if that party does not perform.  A promise to pay another person’s debt or other obligation that is not conditioned on the person’s failure to pay/perform is a primary obligation, whereas a promise to pay only if that party fails to pay is a secondary obligation.  The Statute of Frauds applies to secondary obligations, and the contract must be in writing.  There is one exception – a promise to answer for the debt of another is not subject to the Statute of Frauds if the guarantor’s main purpose in incurring the secondary obligation is to secure a personal benefit.  In that case, the guarantor is, in effect, guaranteeing his own debt and there is no writing requirement.

A promise made in consideration of marriage must be in writing.  This includes both a unilateral promise to give something of value (money or property) in consideration of a promise to marry, as well as prenuptial agreements.  A unilateral promise can be from the future spouse or any third party, but in either case requires written evidence to be enforceable.  A prenup is an agreement made by the partners prior to marriage defining each partner’s ownership rights in the other’s property, and must be in writing to be enforceable.

The Uniform Commercial Code includes Statute of Frauds provisions requiring written evidence or an electronic record of a contract for the sale of goods priced at $500 or more.  The writing need only state the quantity term, and will not be enforceable for any larger quantity.  Other terms can be either omitted or stated less precisely, provided they adequately reflect both parties’ intentions; it need not designate the buyer, seller, terms of payment or price.  A written memorandum or series of communications evidencing a contract is sufficient, as long as it is signed by the party against whom enforcement is sought.

There are a few exceptions to the writing requirement.  When a contract has been partially performed and the parties cannot be returned to their positions prior to the contract’s formation, a court may grant specific performance, an equitable remedy requiring performance of the contract according to its precise terms.  Courts sometimes grant specific performance of an oral contract, after the parties have proved that an oral contract existed.   Oral contracts for the transfer of interests in land might be enforced if partial performance has occurred.  In addition, the UCC provides that an oral contract for the sale of goods is enforceable to the extent that a seller accepts payment or a buyer accepts delivery of the goods.  In general, partial performance indicates that at least one party believes there to be a contract.

If a party against whom enforcement of an oral contract is sought “admits” under oath that the contract for sale was made, the contract is enforceable.  The admission can occur at any stage of the court proceedings.  In addition, a party who admits a contract that is subject to the UCC also makes the contract enforceable, but only to the extent of the quantity admitted.

Some states have also adopted the doctrine of promissory estoppel to enforce oral contracts that would otherwise be unenforceable under the Statute of Frauds.  If a person justifiably relies on another’s promise to her detriment, a court may prevent the promisor from denying the existence of the contract.  For the promise to be enforceable, the promisee must have justifiably relied on it to her detriment, and the reliance must have been foreseeable to the promisor.  In addition, there must be no way to avoid injustice except to enforce the promise.

Finally, under the UCC oral contracts for the purchase of customized goods may be also enforced.

As stated earlier, to satisfy the Statute of Frauds there must be a written contract or a written memorandum or electronic record that evidences the agreement and is signed by the party against whom enforcement is sought.  A writing can consist of an order confirmation, invoice, sales slip, check, fax or email, or a combination thereof.  It need not be a single document to be an enforceable contract.  In addition, one document may incorporate others by expressly referring to them, and several documents may form a single contract if they are physically attached (such as by staple, paper clip or glue, or even if several documents are placed in the same envelope).  A memo or note evidencing an oral contract need only contain the essential terms of the contract, not every term.  There must be an indication the parties voluntarily agreed to the terms, and a writing under the UCC for the sale of goods must include the quantity.  In most states the writing must also name the parties, identify the subject matter, the consideration and the essential terms with reasonable certainty, and contracts for the sale of land typically require the price and a description of the property with sufficient clarity to identify it without the need for outside resources.  Interestingly, since only the party against whom enforcement is sought must have signed the writing, it is possible for a contract to be enforceable by one party but not the other.

Sometimes a written contract does not include, or contradicts, an oral understanding reached by the parties before or at the time of contracting.  If a court determines that the written contract represents the complete and final statement of the parties’ agreement, it will apply the parol evidence rule and not allow either party to present testimony or other evidence of communications between the parties not contained in the contract itself.  In general, a party cannot present evidence that contradicts or varies the terms of a written contract, e.g. negotiations prior to contract formation, agreements prior to contract formation, or oral agreements made at the same time as the contract.  This is a very strict rule, which has led courts to create certain exceptions.  Subject to the Statute of Frauds and the terms of the contract itself regarding modifications, evidence of subsequent modifications, oral or written, to a written contract can be introduced in court.  Oral evidence can also be introduced to show that the contract was void or voidable; when the terms of a written contract are ambiguous or require interpretation, evidence is admissible to show the meaning of the terms; and when a contract lacks one or more of the essential terms, courts allow additional evidence to fill in the blanks.  Under the UCC, evidence can be introduced to explain or supplement a written contract by showing a prior dealing, course of performance, or usage of trade.  Finally, if the parties have orally agreed on a condition precedent prior to full performance of a contract, which does not conflict with the terms of their written agreement, a court may allow parol evidence to prove the oral condition; and when an obvious or gross clerical error or typo exists, parol evidence is permitted to correct the error.